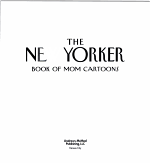 Know that for every exuberant 'I love you' from a three-year-old, you're bound to get a, as they say, developmentally appropriate 'I hate you' from a thirteen-year-old. The trick is to embrace the one and let go of the other. . . . Laughter helps." -Cartoonist Barbara Smaller, introduction to the Book of Moms Perfect for Mother's Day, 100 sarcastically pitch-perfect cartoons culled from The New Yorker archives to celebrate Mom's unique motherly mom-ness. More The New Yorker Magazine Book of Mom Cartoons Since 1925, The New Yorker has cultivated the creme de la creme of cartooning elite, a vanguard of sketching artists with astute wit and clever perceptions of life and living. Inside this special collection, such New Yorker cartooning greats as Charles Barsotti, Robert Mankoff, and Barbara Smaller offer up 100 black-and-white single-panel cartoons in tribute to a diverse array of moms, ranging from football and CEO moms to tattooed and jack-in-the-box moms. A witty introduction by New Yorker cartoonist Barbara Smaller opens this homage by calling attention to a few of her favorite cartoons within the collection, including: * Roz Chast's "Bad Mom cards, where Lucy, Gloria, and others are guilty, guilty, guilty of such crimes as not making Play-Doh from scratch or serving orange soda." * Sam Gross's cartoon depicting a "primordial ooze rising out of a test tube . . . inquiring hopefully of the scientist, 'Are you my mommy?'" 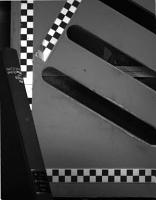 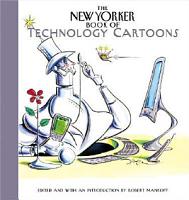 Now at a new, lower price without the CD-ROM. 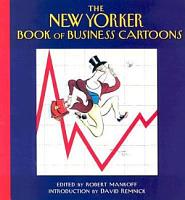 Presents 110 of the very best cartoons on business and finance from seventy-five years of The New Yorker, including works by Charles Addams, Peter Arno, Roz Chast, Lee Lorenz, Robert Mankoff, Mike Twohy, George Booth, and many other notable cartoonists. Original.

Original critical essays on an iconic American periodical, providing new insights into twentieth-century literary culture This collection of newly commissioned critical essays reads across and between New Yorker departments, from sports writing to short stories, cartoons to reporters at large, poetry to annals of business. Attending to the relations between these kinds of writing and the magazine's visual and material constituents, the collection examines the distinctive ways in which imaginative writing has inhabited the 'prime real estate' of this enormously influential periodical. In bringing together a range of sharply angled analyses of particular authors, styles, columns, and pages, this book offers multiple perspectives on American writing and periodical culture at specific moments in twentieth-century history.

In the early 1930's in a small alcove at City College in New York a group of young, passionate, and politically radical students argued for hours about the finer points of Marxist doctrine, the true nature of socialism, and whether or not Stalin or Trotsky was the true heir to Lenin. These young intellectuals went on to write for and found some of the most well known political and literary journals of the 20th century such as The Masses, Politics, Partisan Review, Encounter, Commentary, Dissent and The Public Interest. Figures such as Daniel Bell, Nathan Glazer, Sidney Hook, Susan Sontag, Dwight MacDonald, and Seymour Lipset penned some of the most important books of social science in the mid-twentieth century. They believed, above all else, in the importance of argument and the power of the pen. They were a vibrant group of engaged political thinkers and writers, but most importantly they were public intellectuals committed to addressing the most important political, social and cultural questions of the day. Here, with helpful head notes and a comprehensive introduction by Neil Jumonville, The New York Intellectuals Reader brings the work of these thinkers back into conversation.

When Ann Beattie began publishing short stories in The New Yorker in the mid-seventies, she emerged with a voice so original, and so uncannily precise and prescient in its assessment of her characters’ drift and narcissism, that she was instantly celebrated as a voice of her generation. Her name became an adjective: Beattiesque. Subtle, wry, and unnerving, she is a master observer of the unraveling of the American family, and also of the myriad small occurrences and affinities that unite us. Her characters, over nearly four decades, have moved from lives of fickle desire to the burdens and inhibitions of adulthood and on to failed aspirations, sloppy divorces, and sometimes enlightenment, even grace. Each Beattie story, says Margaret Atwood, is "like a fresh bulletin from the front: we snatch it up, eager to know what’s happening out there on the edge of that shifting and dubious no-man’s-land known as interpersonal relations." With an unparalleled gift for dialogue and laser wit, she delivers flash reports on the cultural landscape of her time. Ann Beattie: The New Yorker Stories is the perfect initiation for readers new to this iconic American writer and a glorious return for those who have known and loved her work for decades. 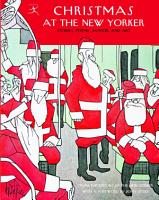 From the pages of America’s most inﬂuential magazine come eight decades of holiday cheer—plus the occasional comical coal in the stocking—in one incomparable collection. Sublime and ridiculous, sentimental and searing, Christmas at The New Yorker is a gift of great writing and drawing by literary legends and laugh-out-loud cartoonists. Here are seasonal stories, poems, memoirs, and more, including such classics as John Cheever’s 1949 story “Christmas Is a Sad Season for the Poor,” about an elevator operator in a Park Avenue apartment building who experiences the ﬁckle power of charity; John Updike’s “The Carol Sing,” in which a group of small-town carolers remember an exceptionally enthusiastic fellow singer (“How he would jubilate, how he would God-rest those merry gentlemen, how he would boom out when the male voices became King Wenceslas”); and Richard Ford’s acerbic and elegiac 1998 story “Crèche,” in which an unmarried Hollywood lawyer spends an unsettling holiday with her sister’s estranged husband and kids. Here, too, are S. J. Perelman’s 1936 “Waiting for Santy,” a playlet in the style of Clifford Odets labor drama (the setting: “The sweatshop of Santa Claus, North Pole”), and Vladimir Nabokov’s heartbreaking 1975 story “Christ-mas,” in which a father grieving for his lost son in a world “ghastly with sadness” sees a tiny miracle on Christmas Eve. And it wouldn’t be Christmas—or The New Yorker—without dozens of covers and cartoons by Addams, Arno, Chast, and others, or the mischievous verse of Roger Angell, Calvin Trillin, and Ogden Nash (“Do you know Mrs. Millard Fillmore Revere?/On her calendar, Christmas comes three hundred and sixty-ﬁve times a year”). From Jazz Age to New Age, E. B. White to Garrison Keillor, these works represent eighty years of wonderful keepsakes for Christmas, from The New Yorker to you. From the Hardcover edition. 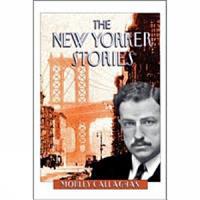 In 1928, just after he published his first novel, Morley Callaghan asked his editor, "Do you think The New Yorker would be a good magazine for my stories? They have never printed fiction before, but are going to start with that story of mine called 'An Escapade.'" Through these short stories from Callaghan--whom Ernest Hemingway compared to James Joyce--readers will realize just how good a fit is was.