The Lemon Tree is the true story of a Siberian pioneer family's extraordinary year-long journey as they transport their late son's tiny lemon tree to Israel. Ten-year-old Sasha has one dying wish: he asks his family to take his lemon tree-the tree he raised from a seed floating in his tea-and plant it in an orchard in Israel. Nothing deters Sasha's family from fulfilling his dream. The Wissotzskys travel on cattle trains through the Trans-Siberian line, become stranded in Shanghai, are shot at by Manchurian officials, and face the constant threat of typhoid fever, as they overcome these and other harrowing obstacles on their 1918 journey. Against all odds, this real-life pioneer family perseveres in their quest to fulfill a child's dying wish. Can the little tropical tree survive the cold, harsh journey? 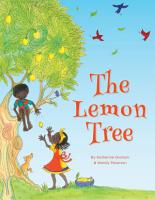 When it’s pouring with rain, Gogo decides to pass the time by making some pancakes. But she soon discovers that the family has run out of three important ingredients: flour, eggs and milk. Without those, you can’t make pancakes. But clever Gogo has an idea. She sends Lungi and Sipho to a different neighbour to borrow what they need, and to take each of them a gift of lemons from the family’s lemon tree in return. And so, due to the kindness of the neighbours, Gogo and the eager children are finally able to make the pancakes. In The Lemon Tree, nominated for a prestigious Golden Baobab Prize in 2014, author Katherine Graham tells a simple, moral story with charm and an ability to transport the young reader evocatively into the moment. The story is beautifully illustrated by Wendy Paterson.

A recipe for salvation through the eyes of a child: 1 little girl 1 lemon tree 1 secret ingredient Read to see what mixing these ingredients will create. You will never look at a lemon tree the same way.

THE SUNDAY TIMES TOP TEN BESTSELLER 'Delightful' Katie Fforde 'Full of joy and fun' Milly Johnson 'Uplifting . . . Books by Cathy Bramley are brilliantly life affirming' Good Housekeeping ___ Rich espresso, delicious biscotti and juicy village gossip - will Rosie fall for this new way of life? When Rosie Featherstone finds herself unexpectedly jobless, the offer to help her beloved Italian grandmother out at the Lemon Tree Cafe - a little slice of Italy nestled in the rolling hills of Derbyshire - feels like the perfect way to keep busy. But Rosie is haunted by a terrible secret, one that even the appearance of a handsome new face can't quite help her move on from. Then disaster looms and the cafe's fortunes are threatened . . . and Rosie discovers that her nonna has been hiding a dark past of her own. With surprises, betrayal and more than one secret brewing, can she find a way to save the Lemon Tree Cafe and help both herself and Nonna achieve the happy endings they deserve? ___ Readers are falling in love with The Lemon Tree Café: ***** 'A treat! . . . It will tickle your taste buds, squeeze your heart and refresh your soul.' ***** 'A charming and heart-warming story that will make you laugh but that will surprise you too' ***** 'What a fabulous read . . . a lovely story about family and love and community spirit.'

In the summer of 1967, not long after the Six Day War, three young Palestinian men ventured into the town of Ramla in Israel. They were cousins, on a pilgrimage to see their childhood homes, from which they and their families had been driven out nearly twenty years earlier. One cousin had the door slammed in his face, one found that his old house had been converted into a school. But the third, Bashir, was met at the door by a young woman named Dalia, who invited him in... This poignant encounter is the starting point for the story of two families - one Arab, one Jewish - which spans the fraught modern history of the region. In the lemon tree his father planted in the backyard of his childhood home, Bashir sees a symbol of occupation; Dalia, who arrived in 1948 as an infant with her family, as a fugitive from Bulgaria, sees hope for a people devastated by the Holocaust. Both are inevitably swept up in the fates of their people and the stories of their lives form a microcosm of more than half a century of Israeli-Palestinian history. What began as a simple meeting between two young people grew into a dialogue lasting four decades. The Lemon Tree offers a much needed human perspective on this seemingly intractable conflict and reminds us not only of all that is at stake, but also of all that is possible.