This book is recommended reading for planners preparing to take the AICP exam. In this new book, the author bridges the gap between theory and practice. The author describes an original approach-Feedback Strategy-that builds on the strengths of previous planning theories with one big difference: it not only acknowledges but welcomes politics-the bogeyman of real-world planning. Don't hold your nose or look the other way, the author advises planners, but use politics to your own advantage. The author admits that most of the time planning theory doesn't have much to do with planning practice. These ideas rooted in the planner's real world are different. This strategy employs everyday poltiical processes to advance planning, trusts planners' personal values and professional ethics, and depends on their ability to help clients articulate a vision. This volume will encourage not only veteran planners searching for a fresh approach, but also students and recent graduates dismayed by the gap between academic theory and actual practice.

Discussing some of the most vexing criticism of communicative planning theory (CPT), this book goes on to suggest how theorists and planners can respond to it. Looking at issues of power, politics and ethics in relation to planning, this book is for both critics and advocates of CPT, with lessons for all. With severe criticisms being raised against CPT, the need has arisen to systematically think through what responsibilities planning theorists might have for the end-uses of their theoretical work. Offering inventive proposals for amending the shortcomings of this widely adhered planning method, this book reflects on what communicative planning theorists and practitioners can and should do differently.

A Guide to the Project Management Body of Knowledge (PMBOK Guide) Fifth Edition reflects the collaboration and knowledge of working project managers and provides the fundamentals of project management as they apply to a wide range of projects. This internationally recognized standard gives project managers the essential tools to practice project management and deliver organizational results. A 10th Knowledge Area has been added; Project Stakeholder Management expands upon the importance of appropriately engaging project stakeholders in key decisions and activities. Project data information and information flow have been redefined to bring greater consistency and be more aligned with the Data, Information, Knowledge and Wisdom (DIKW) model used in the field of Knowledge Management. Four new planning processes have been added: Plan Scope Management, Plan Schedule Management, Plan Cost Management and Plan Stakeholder Management: These were created to reinforce the concept that eac 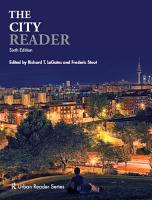 The sixth edition of the highly successful The City Reader juxtaposes the very best classic and contemporary writings on the city to provide the comprehensive mapping of the terrain of Urban Studies and Planning old and new. The City Reader is the anchor volume in the Routledge Urban Reader Series and is now integrated with all ten other titles in the series. This edition has been extensively updated and expanded to reflect the latest thinking in each of the disciplinary areas included and in topical areas such as compact cities, urban history, place making, sustainable urban development, globalization, cities and climate change, the world city network, the impact of technology on cities, resilient cities, cities in Africa and the Middle East, and urban theory. The new edition places greater emphasis on cities in the developing world, globalization and the global city system of the future. The plate sections have been revised and updated. Sixty generous selections are included: forty-four from the fifth edition, and sixteen new selections, including three newly written exclusively for The City Reader. The sixth edition keeps classic writings by authors such as Ebenezer Howard, Ernest W. Burgess, LeCorbusier, Lewis Mumford, Jane Jacobs, and Louis Wirth, as well as the best contemporary writings of, among others, Peter Hall, Manuel Castells, David Harvey, Saskia Sassen, and Kenneth Jackson. In addition to newly commissioned selections by Yasser Elshestawy, Peter Taylor, and Lawrence Vale, new selections in the sixth edition include writings by Aristotle, Peter Calthorpe, Alberto Camarillo, Filip DeBoech, Edward Glaeser, David Owen, Henri Pirenne, The Project for Public Spaces, Jonas Rabinovich and Joseph Lietman, Doug Saunders, and Bish Sanyal. The anthology features general and section introductions as well as individual introductions to the selected articles introducing the authors, providing context, relating the selection to other selection, and providing a bibliography for further study. The sixth edition includes fifty plates in four plate sections, substantially revised from the fifth edition.

Reflective Planning Practice: Theory, Cases, and Methods uses structured, first-person reflection to reveal the artistry of planning practice. The value of professional reflection is widely recognized, but there is a difference between acknowledging it and doing it. This book takes up that challenge, providing planners’ reflections on past practice as well as prompts for reflecting in the midst of planning episodes. It explains a reflection framework and employs it in seven case studies written by planning educators who also practice. The cases reveal practical judgments made during the planning episode and takeaways for practice, as the planners used logic and emotion, and applied convention and invention. The practical judgments are explained from the perspective of the authors’ personal experiences, purposes, and professional style, and their interpretation of the rich context that underpins the cases including theories, sociopolitical aspects, workplace setting, and roles. The book seeks to awaken students and practitioners to the opportunities of a pragmatic, reflective approach to planning practice.

What is this thing called planning? What is its domain? What do planners do? How do they talk? What are the limits and possibilities for planning imposed by power, politics, knowledge, technology, interpretation, ethics, and institutional design? In this comprehensive volume, the foremost voices in planning explore the foundational ideas and issues of the profession. Explorations in Planning Theory is an extended inquiry into the practice of the profession. As such, it is a landmark text that defines the field for today's planners and the next generation. As Seymour J. Mandelbaum notes in the introduction, "the shared framework of these essays captures a pervasive interest in the behavior, values, character, and experience of professional planners at work." All of the chapters in this volume are written to address arguments that are important in the community of planning theoreticians and are crafted in the language of that community. While many of the contributors included here differ in their styles, the editors note that students, experienced practitioners, and scholars of city and regional planning will find this work illuminating and helpful in their research.

Planning Theory expresses a sound unease about the direction taken by the current analysis and criticism of planning experiences. To oppose the debate that freezes planning as a permanently declining engagement, this book aims to identify the essential guidelines of a re-launch of planning processes and techniques, configuring a kind of neo-discipline. This builds upon a multi-disciplinary integration - never seen and experimented with until now.

For much of the twentieth century improvement in the situation of disadvantaged communities was a focus for urban planning and policy. Yet over the past three decades the ideological triumph of neoliberalism has caused the allocation of spatial, political, economic, and financial resources to favor economic growth at the expense of wider social benefits. Susan Fainstein's concept of the "just city" encourages planners and policymakers to embrace a different approach to urban development. Her objective is to combine progressive city planners' earlier focus on equity and material well-being with considerations of diversity and participation so as to foster a better quality of urban life within the context of a global capitalist political economy. Fainstein applies theoretical concepts about justice developed by contemporary philosophers to the concrete problems faced by urban planners and policymakers and argues that, despite structural obstacles, meaningful reform can be achieved at the local level. In the first half of The Just City, Fainstein draws on the work of John Rawls, Martha Nussbaum, Iris Marion Young, Nancy Fraser, and others to develop an approach to justice relevant to twenty-first-century cities, one that incorporates three central concepts: diversity, democracy, and equity. In the book's second half, Fainstein tests her ideas through case studies of New York, London, and Amsterdam by evaluating their postwar programs for housing and development in relation to the three norms. She concludes by identifying a set of specific criteria for urban planners and policymakers to consider when developing programs to assure greater justice in both the process of their formulation and their effects.