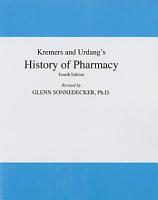 Pharmacy has become an integral part of our lives. Nearly half of all 300 million Americans take at least one prescription drug daily, accounting for $250 billion per year in sales in the US alone. And this number doesn't even include the over-the-counter medications or health aids that are taken. How did this practice become such an essential part of our lives and our health? A Brief History of Pharmacy: Humanity's Search for Wellness aims to answer that question. As this short overview of the practice shows, the search for well-being through the ingestion or application of natural products and artificially derived compounds is as old as humanity itself. From the Mesopotamians to the corner drug store, Bob Zebroski describes how treatments were sought, highlights some of the main victories of each time period, and shows how we came to be people who rely on drugs to feel better, to live longer, and look younger. This accessible survey of pharmaceutical history is essential reading for all students of pharmacy.

Get an inside look at the lives of military and civilian pharmacists during wartime! Pharmacy in World War II is a comprehensive history of American pharmacy, both in the military and on the home front, from 1941 to 1945. The book provides a unique insight into the profession, the practice, and its practitioners through the memories of those who served as pharmacist mates, corpsmen, or civilian pharmacists. Through accounts recorded in publications, stored in archives, or told first-hand, you’ll learn about the fight to establish an Army Pharmacy Corps, the work of the Selective Service committees to preserve an adequate pool of pharmacists for civilian practice, the bond drives that would buy hospital airplanes and trains, and a great deal more. Pharmacy in World War II also looks at the organizational, economic, educational, professional, and societal issues that molded pharmacy during a watershed in modern American history. Author Dennis B. Worthen, editor-in-chief of Haworth’s Pharmaceutical Heritage book series, compiled a database of more than 11,000 pharmacists, pharmacy students, and veterans in pharmacy school during wartime as part of the “Memories Project” that recalls the activities of the professional, trade, and educational institutions of pharmacy, their goals and development, and their interactions, agreements, and differences. The book examines the fight for an Army Pharmacy Corps, shortages and rationing on the home front, manpower shortages, the impact of the Selective Service, and the prevalent attitude in the military that pharmacy was a business, not a learned profession, and that pharmaceutical services could be learned with 90 days of training. Pharmacy in World War II includes memories of: pharmacy in the pre-World War II years pharmacy education the Selective Service the drugstore’s role in the war effort the Pharmacy Corps returning veterans The book also includes photographs and images as well as appendices listing colleges and schools of pharmacy, Selective Service pharmacy advisory committees, pharmacy organizations and leaders, extracts from Army medical departments supply catalogs, and pharmacists and pharmacy students who died in the war. Pharmacy in World War II is an invaluable document for pharmacy students, practitioners, and educators, and for students of American history.

Originally published in 1995, The History of Pharmacy is a critical bibliography of selected information on the history of pharmacy. The book is designed to guide students and academics through the history of science and technology. Topics range from medicine, chemical technology and the economics and business of pharmacy to pharmacy’s influence in the arts. The bibliography includes an exhaustive selection of primary and secondary sources and is arranged chronologically. This book will be of interest to those researching in the area of the history of science and technology and will appeal to students and academic researchers alike.