Explores a life intertwined with the story of a people from the Israelite Exodus from Egypt and the birth of a new nation, to the Divine revelation at Mount Sinai."

Leaders are not simply born; they are molded through life's victories and failures, triumphs and defeats. No one exemplifies this process better than Moses, the most important and celebrated character in the Hebrew Bible. Faced with great internal and external challenges, he was sculpted into a great leader not only by circumstance, but also by his own determination and devotion to his people.

Explores a life intertwined with the story of a people from the Israelite Exodus from Egypt and the birth of a new nation, to the Divine revelation at Mount Sinai." 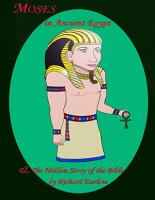 A non-fictional account explaining why the author believes Moses was a prince of Thebes called Ramose. Born c.1500 BC, Prince Ramose was heir to Pharaoh Thutmose III, being his ""Great Army Commander"" - both roles ascribed to Moses by Hebrew tradition. Moreover, Ramose & Moses both led victorious military campaigns against Ethiopia (Cush), then married the king's daughter, becoming Egypt's Viceroy there. A short time later, Prince Ramose was mysteriously struck out of Egyptian records, while the Bible hints Moses was cast into exile. Exploring some of the more esoteric aspects of the prophet's life, this book finds threads firmly connecting him to Egypt's 18th Dynasty 3500 years ago... The book uncovers the Hermetic star knowledge (Astrology) which Moses gleaned from the White Brotherhood, a secretive Egyptian mystery school who met in the halls of Karnak. This knowledge was cryptically infused into the early Biblical scriptures, revealing the Israelite ancestors were once devoted Astrologers.

Two ancient cultures meet. Two nations clash. The recent updating of Egyptian chronology puts a new slant on the history of Egypt and Israel. Moses and Hatshipsut are raised as brother and sister and then grow up to become leaders of these two nations. From palace privilege to desert deprivation, the character of Moses is forged. While Moses, the Prince of Egypt, turns his back on the throne, his sister, “Hat” dreams of becoming Pharaoh. How this unique woman overcomes personal tragedy and loss to rule successfully for twenty years the most advanced civilization of her time is a fascinating story. Fast forward to the early 20th century. Imagine the excitement when out of the murky depths of King Tot’s tomb emerged the magnificent golden throne of that short lived ruler, a descendant of Hatshepsut. The Prophet and the Pharaoh takes us back to1446 B.C. with the account of Moses emerging from the spiritual darkness of polytheistic Egypt to reveal to the world a gleam of gold...The Golden Rule, embedded in the Ten Commandments.