Gerry Conway is one of the top creators of the DC Universe, now some of his most popular stories of the World's Greatest Super Heroes are collected for the first time! While the male Leaguers are distracted by a bachelor party for the Atom, Amos Fortune captures Wonder Woman and uses the magical properties of her body to infuse seven random people with superpowers, then sends them to battle the Justice League! Collects Justice League of America #147-157 and Super-Team Family #11-12. 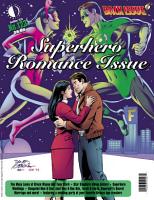 The Silver Age of Comics looks at super-hero comic books that were published in the mid-fifties to late sixties in a period that is now known as the "silver age" and when super-heroes -- most of whom had been replaced by science fiction, crime and romance comics etc, -- once again gained popularity and grew to virtually take over the whole comic book industry [basically this is still true today]. The book looks at how DC comics -- publisher of Superman and Batman -- reintroduced such golden age heroes as Green Lantern and The Flash [whose original books had been discontinued], giving them new identities, origins and costumes -- to get success. Then there's Marvel Comics, which introduced more "realistic" [in that they had human problems] characters such as the Fantastic Four, Spider-Man, and the X-Men [who became a comics publishing phenomenon]. Creating interest in older readers, Marvel not only became a serious competitor to DC, but eventually overtook them to become the number one company. But Silver Age isn't only of interest to baby boomers who grew up during this period, but to today's readers, as many of today's most popular characters [in both comics and films] got their start in the silver age: Spider-Man [3 hit movies and now a Broadway show]; X-Men, Iron Man and others are all currently big hits on the big screen and all date back to the sixties. [It's interesting that when it was decided to make a film based on Green Lantern, the filmmakers chose the silver age GL, Hal Jordan, instead of more recent incarnations.] The silver age characters simply have a certain mythic appeal. . The book not only looks at popular and lesser-known series [including those from smaller publishers such as Charlton and Gold Key], commenting on the most interesting stories, it also examines the artists who were prominent during this period, and looks at why their work could be so effective on different strips. Jack "King" Kirby, Gil Kane, Carmine Infantino, Jim Steranko, Steve Ditko, Neal Adams and others were giants, extremely talented illustrators whose dynamic work added immeasureably to the popularity of each character and series. The book also looks at how different comics reflected -- or didn't reflect -- the changing mores and attitudes of the turbulent times when civil rights, women's rights, and other social movements got more and more attention. WILLIAM SCHOELL is the author of many books on pop culture, film and the performing arts, as well as biographies. His film and pop culture books include Comic Book Heroes of the Screen; The Nightmare Never Ends: The Official History of Freddy Kruger and the ‘Nightmare on Elm Street' Films; Creature Features: Nature Turned Nasty in the Movies and Stay Out of the Shower, the first book to look at Alfred Hitchcock's "Psycho" and its influence. His biographies include the natonal bestseller The Rat Pack: Neon Nights with the Kings of Cool; Martini Man: The Life of Dean Martin and The Sundance Kid: The Life of Robert Redford. as well as studies of such figures as Jules Verne, Edgar Allan Poe, Giuseppi Verdi, H. P. Lovecraft, Dorothy Dandridge, and Sammy Davis Jr. for young adults. His novels include Fatal Beauty, The Pact, The Dragon, Late at Night and Saurian. Schoell is a native New Yorker.

"Goes into extensive detail about the individual characters starting from their origins and their transition and evolution through the decades...makes for fascinating reading”--Collector’s Corner "These essays provide an insightful and entertaining exploration of how a superhero team, spearheaded by America’s most iconic pop culture creations, reflects, and sometimes critiques, American attitudes toward justice, morality and the use of power.”--﻿Randy Duncan, director of Henderson State University’s Comics Studies program, co-author of The Power of Comics “Joseph J. Darowski’s The Ages of the Justice League: Essays on America’s Greatest Superheroes in Changing Times is an exceptional study that is highly informative, critically brilliant, and fun to read. It cements his already outstanding reputation as one of the foremost comics scholars in America.”--Gary Hoppenstand, Michigan State University. The first superhero team from the Silver Age of comics, DC's Justice League has seen many iterations since its first appearance in 1960. As the original comic book continued and spin-off titles proliferated, talented writers, artists and editors adapted the team to appeal to changing audience tastes. This collection of new essays examines more than five decades of Justice League comics and related titles. Each essay considers a storyline or era of the franchise in its historical and social contexts.

Appealing to the casual comic book reader as well as the hardcore graphic novel fan, this ultimate AtoZ compendium describes everyone’s favorite participants in the eternal battle between good and evil. With nearly 200 entries examining more than 1,000 heroes, icons and their place in popular culture, it is the first comprehensive profile of superheroes across all media, following their path from comic book stardom to radio, television, movies, and novels. The best-loved and most historically significant superheroes—mainstream and counterculture, famous and forgotten, best and worst—are presented with numerous full-color illustrations, including dozens of classic comic covers. Each significant era of the superhero is explored—from the Golden Age of the 1930s, 1940s, and 1950s through the Modern Age—providing a unique perspective of the role of the hero over the course of the 20th century and beyond. This latest edition has been revised to reflect updates on existing characters, coverage of new characters, and recent films and media trends in the last several years.

An alphabetically arranged review of people, events, places, and characters significant in folklore, comic strips, television, and other media of fantasy.

Provides information on the lives, costumes, weapons, and first appearances of superhero characters from comics, television, movies, and novels

Collects Spider-Girl (1998) #16-32. Continuing the far-out future adventures of May “Mayday” Parker, the daughter of Peter and Mary Jane! Will the spectacular Spider-Girl be the only member of the Parker clan to wear the webs when the villainous Kaine resurfaces? The Raptor strikes, the Buzz flies in and the Soldiers of the Serpent spread hate — but nothing could be worse than the return of Spider-Man’s archfoe, the Green Goblin! But who’s under the mask now?! On top of it all, May must contend with threats like Earthshaker, Funny Face and Dragonfist! What is this martial-arts maestro’s connection to Danny Rand? Meanwhile, May’s deadliest foes band together as…the Savage Six! Or is it Seven?! Will they be the end of Spider-Girl? Plus: The man called Nova! Avengers Next! The Steel Spider! And more!