Can democratic states transplant the seeds of democracy into developing countries? What have political thinkers going back to the Greek city-states thought about their capacity to promote democracy? How can democracy be established in divided societies? This books answers these and other fundamental questions behind the concept known as 'democracy promotion.' Following an illuminating concise discussion of what political philosophers from Plato to Montesquieu thought about the issue, the authors explore the structural preconditions (culture, divided societies, civil society) as well as the institutions and processes of democracy building (constitutions, elections, security sector reform, conflict, and trade). Along the way they share insights about what policies have worked, which ones need to be improved or discarded, and, more generally, what advanced democracies can do to further the cause of democratization in a globalizing world. In other words, they seek answers to the question, Is democracy exportable?

Citizen Support for Democratic and Autocratic Regimes takes a political-culture perspective on the struggle between democracy and autocracy by examining how these regimes fare in the eyes of their citizens. Taking a globally comparative approach, it studies both the levels as well as the individual- and system-level sources of political support in democracies and autocracies worldwide. The book develops an explanatory model of regime support which includes both individual- and system level determinants and specifies not only the general causal mechanisms and pathways through which these determinants affect regime support but also spells out how these effects might vary between the two types of regimes. It empirically tests its propositions using multi-level structural equation modeling and a comprehensive dataset that combines recent public-opinion data from six cross-national survey projects with aggregate data from various sources for more than 100 democracies and autocracies. It finds that both the levels and individual-level sources of regime support are the same in democracies and autocracies, but that the way in which system-level context factors affect regime support differs between the two types of regimes. The results enhance our understanding of what determines citizen support for fundamentally different regimes, help assessing the present and future stability of democracies and autocracies, and provide clear policy implications to those interested in strengthening support for democracy and/or fostering democratic change in autocracies. Comparative Politics is a series for researchers, teachers, and students of political science that deals with contemporary government and politics. Global in scope, books in the series are characterised by a stress on comparative analysis and strong methodological rigour. The series is published in association with the European Consortium for Political Research. For more information visit: www.ecprnet.eu. The series is edited by Susan Scarrow, Chair of the Department of Political Science, University of Houston, and Jonathan Slapin, Professor, Department of Political Science, University of Zurich

After the 1994 Oslo Accords, Palestinians were hopeful that an end to the Israeli occupation was within reach, and that a state would be theirs by 1999. With this promise, international powers became increasingly involved in Palestinian politics, and many shadows of statehood arose in the territories. Today, however, no state has emerged, and the occupation has become more entrenched. Concurrently, the Palestinian Authority has become increasingly authoritarian, and Palestinians ever more polarized and demobilized. Palestine is not unique in this: international involvement, and its disruptive effects, have been a constant across the contemporary Arab world. This book argues that internationally backed authoritarianism has an effect on society itself, not just on regime-level dynamics. It explains how the Oslo paradigm has demobilized Palestinians in a way that direct Israeli occupation, for many years, failed to do. Using a multi-method approach including interviews, historical analysis, and cutting-edge experimental data, Dana El Kurd reveals how international involvement has insulated Palestinian elites from the public, and strengthened their ability to engage in authoritarian practices. In turn, those practices have had profound effects on society, including crippling levels of polarization and a weakened capacity for collective action. 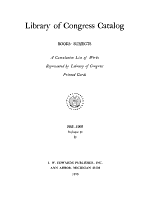 A cumulative list of works represented by Library of Congress printed cards.