How to be a Victorian - travel back in time with the BBC's Ruth Goodman Step into the skin of your ancestors . . . We know what life was like for Victoria and Albert. But what was it like for a commoner like you or me? How did it feel to cook with coal and wash with tea leaves? Drink beer for breakfast and clean your teeth with cuttlefish? Dress in whalebone and feed opium to the baby? Catch the omnibus to work and do the laundry in your corset? Surviving everyday life came down to the gritty details, the small necessities and tricks of living . . . How To Be A Victorian by Ruth Goodman is a radical new approach to history; a journey back in time more intimate, personal and physical than anything before. It is one told from the inside out - how our forebears interacted with the practicalities of their world - and it is a history of those things that make up the day-to-day reality of life, matters so small and seemingly mundane that people scarcely mention them in their diaries or letters. Moving through the rhythm of the day, from waking up to the sound of a knocker-upper man poking a stick at your window, to retiring for nocturnal activities, when the door finally closes on twenty four hours of life, this astonishing guide illuminates the overlapping worlds of health, sex, fashion, food, school, work and play. If you liked A Time Traveller's Guide to Medieval England or 1000 Years of Annoying the French, you will love this book. Ruth Goodman is an independent scholar and historian, specialising in social and domestic history. She works with a wide range of museums and other academic institutions exploring the past of ordinary people and their activities. She has presented a number of BBC 2 television series, including Victorian Farm, Edwardian Farm and Wartime Farm. In each of these programs, she spent a year recreating life from a different period. As well as her involvement with the Farm series, Ruth makes frequent appearances on The One Show and Coast.

A “revelatory” (Wall Street Journal) romp through the intimate details of Victorian life, by an historian who has cheerfully endured them all. Lauded by critics, How to Be a Victorian is an enchanting manual for the insatiably curious, the “the cheapest time-travel machine you’ll find” (NPR). Readers have fallen in love with Ruth Goodman, an historian who believes in getting her hands dirty. Drawing on her own firsthand adventures living in re-created Victorian conditions, Goodman serves as our bustling guide to nineteenth-century life. Proceeding from daybreak to bedtime, this charming, illustrative work “imagines the Victorians as intrepid survivors” (New Republic) of the most perennially fascinating era of British history. From lacing into a corset after a round of calisthenics to slipping opium to the little ones, Goodman’s account of Victorian life “makes you feel as if you could pass as a native” (The New Yorker).

The reader is about to become a Victorian servant in Britain around 1885 and learns about the responsibilities and hardships that come with the position.

Lightning provides: 32 books with 3 levels of differentiation per book; whole texts that provide NLS genre coverage; linked themes across fiction, non-fiction and the wider curriculum; focussed teaching support for each book including comprehension and writing activities; and a teaching and practice CD that provides opportunities for ICT.

Mandell Creighton was a historian and the first editor of the English Historical Review. His wife Louise, was an advocate of the Victorian women's movement. This text includes their writings and letters allowing us a glimpse into Victorian life.

A biography of Matthew Arnold's Catholic younger brother Tom, a scholar, teacher, and self-styled 'wanderer'. Arnold's path in life took him, after a brilliant start at Oxford, to colonial New Zealand, to Tasmania, to Dublin, back to Oxford, and once more to Dublin, where he died in 1900. Hisspiritual wanderings led him into the Catholic Church, then out of it for some years, and finally back to it. He was close both to Matthew and to John Henry Newman, and his relations with them show unfamiliar aspects of these eminent Victorians. As a young man, Tom Arnold knew the elderlyWordsworth, and Arthur Hugh Clough was his closest friend. He was acquainted with such celebrated Oxford personalities as Benjamin Jowett, Mark Pattison, and Lewis Carroll; as a Professor of English in Dublin he was a colleague of Gerard Manley Hopkins; and in the last year of his life he read andapproved of an undergraduate essay by James Joyce.The book makes an original contribution to Victorian studies at the same time as telling an absorbing human story. An appendix contains a previously unpublished letter from Matthew Arnold to his brother.

First published in 1979, this collection of thirty-nine essays on the novel drawn from seventeen periodicals demonstrates the primary concerns of those discussing the nature and purpose of prose fiction in the period from 1870 to 1900. The essays reflect what was thought and said about the art of fiction and reveal what journalists of these periodicals thought were the most urgent critical concerns facing the working reviewer. Including an introduction which assesses the issues raised by the best periodicals at the time, this anthology is designed to provide students of Victorian fiction and critical theory with a collection of essays on the art of fiction in a convenient and durable form.

In Bloody Lessons, it's the winter of 1880, and the teachers of San Francisco are under attack: their salaries slashed and their competency and morals questioned in a series of poison pen letters. Annie Fuller, the reluctant clairvoyant, has been called in to investigate by Nate Dawson, her lawyer beau, and the case becomes personal when they discover that Laura, Nate's sister, may be one of the teachers being targeted. In this installment of the Victorian San Francisco Mystery series, readers will find the same blend of a cozy mystery and romantic suspense, played out against the historical backdrop of late 19th century San Francisco, that they found in Maids of Misfortune and Uneasy Spirits. If you are new to this series, you will still enjoy spending time with the lively residents of Annie Fuller's boarding house and visiting San Francisco when Golden Gate Park was filled with horse-drawn carriages, politics were controlled by saloon-keepers, and kisses were stolen under gaslight. 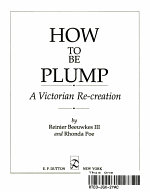 Combining witty Victorian-era illustrations with dated fitness advice from the nineteenth century, when plumpness was considered attractive, this volume offers diet-wary and exercise-worn readers a healthy dose of humor and an alternate perspective on plumpness

What did a Victorian lady wear for a walk in the park? How did she style her hair for an evening at the theatre? And what products might she have used to soothe a sunburn or treat an unsightly blemish? Mimi Matthews answers these questions and more as she takes readers on a decade-by-decade journey through Victorian fashion and beauty history. Women's clothing changed dramatically during the course of the Victorian era. Necklines rose, waistlines dropped, and Gothic severity gave way to flounces, frills, and an abundance of trimmings. Sleeves ballooned up and skirts billowed out. The crinoline morphed into the bustle and steam-moulded corsets cinched women's waists ever tighter. As fashion was evolving, so too were trends in ladies' hair care and cosmetics. An era which began by prizing natural, barefaced beauty ended with women purchasing lip and cheek rouge, false hairpieces and pomades, and fashionable perfumes made with expensive spice oils and animal essences. Using research from nineteenth century beauty books, fashion magazines, and lady's journals, Mimi Matthews brings the intricacies of a Victorian lady's toilette into modern day focus. In the process, she gives readers a glimpse of the social issues that influenced women's clothing and the societal outrage that was an all too frequent response to those bold females who used fashion and beauty as a means of asserting their individuality and independence. AUTHOR: Mimi Matthews is the author of The Pug Who Bit Napoleon: Animal Tales of the 18th and 19th Centuries (published by Pen & Sword Books) and The Lost Letter: A Victorian Romance. Her articles on nineteenth century history have been published on various academic and history sites, including the Victorian Web and the Journal of Victorian Culture, and are also syndicated weekly at BUST Magazine, New York. In her other life, Mimi is an attorney with both a Juris Doctor and a Bachelor of Arts in English Literature. She resides in California with her family, which includes an Andalusian dressage horse, two Shelties, and two Siamese cats. 60 illustrations