This book demonstrates how Richter pursues the theme of the portrait in his various types of work, as well as in all of the visual genres in which he works: painting, prints, drawing photography, and film.

This survey of Gerhard Richter portraits covers the period from the 1960s to 2009. It explores a vital aspect of his art in unprecedented detail, and highlights include the important early black and white paintings made from magazine photographs, portraits based on private snapshots and a new portrait never previously shown. 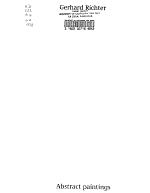 For the subscription edition of "Schriften und Interviews", that was published by Insel Verlag in 1993 in an edition of 100 copies, Richter drew a 23.5 x 17.7 cm "self-portrait" in pencil on the back of a portrait photograph at the front of the book. Enthused by his work, he produced a further 94 signed and dated self-portraits between the 3rd of September and the 12th of December 1993 on loose leaves, which are published here for the first time. It is when they are seen together as a series that this brilliant exercise becomes impressive. Despite the means of production being largely the same or similar, each instance has an individual formal and aesthetic appearance. The pencil drawings form an open series of variations, whose aspiration is not the gradual nearing of a perfected final outcome, but rather the serial testing of different, but equally weighted possibilities of representation within limited specifications.00Exhibition: Albertinum, Dresden, Germany (01.06. - 26.08.2018).

Gerhard Richter is widely seen as one of the most important painters at work in the world today. Born in Dresden, Germany, in 1932, he left for the West in 1961, settling in Dusseldorf, where he held his first exhibition in 1963. He has exhibited internationally for the last five decades, including retrospectives in New York, Paris and Dusseldorf. He lives and works in Cologne. As the artist draws near to his eightieth birthday in 2012, Tate Modern in collaboration with the Neue Nationalgalerie, Berlin, and the Centre Pompidou, Paris, is staging a major retrospective exhibition. Exhibition: Tate Modern, London 6 October 2011 - 8 January 2012 / Neue Nationalgalerie, Berlin February - April 2012 / Centre Pompidou, Paris 6 June - 24 September 2012.