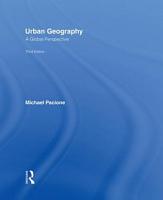 Today, for the first time in the history of Humankind urban dwellers outnumber rural residents. Urban places, towns and cities, are of fundamental importance – for the distribution of population within countries; in the organization of economic production, distribution and exchange; in the structuring of social reproduction and cultural life; and in the allocation and exercise of power. Furthermore, in the course of the present century the number of urban dwellers and level of global urbanisation are destined to increase. Even those living beyond the administrative or functional boundaries of a town or city will have their lifestyle influenced to some degree by a nearby, or even distant, city. The analysis of towns and cities is a central element of all social sciences including geography, which offers a particular perspective on and insight into the urban condition. The principal goal of this third edition of the book remains that of providing instructors and students of the contemporary city with a comprehensive introduction to the expanding field of urban studies. The structure of the first two editions is maintained, with minor amendments. Each of the thirty chapters has been revised to incorporate recent developments in the field. All of the popular study aids are retained; the glossary has been expanded; and chapter references and notes updated to reflect the latest research. This third edition also provides new and expanded discussions of key themes and debates including detailed consideration of metacities, boomburgs, public space, urban sprawl, balanced communities, urban economic restructuring, poverty and financial exclusion, the right to the city, urban policy, reverse migration , and traffic and transport problems. The book is divided into six main parts. Part one outlines the field of urban geography and explains the importance of a global perspective. Part two explores the growth of cities from the earliest times to the present day and examines the urban geography of the major world regions. Part three considers the dynamics of urban structure and land use change in Western cities. Part four focuses on economy, society and politics in the Western city. In part five attention turns to the urban geography of the Third World, where many of the countries experiencing highest rates or urban growth are least well equipped to respond to the economic, social, political and environmental challenge. Finally part six affords a prospective on the future of cities and cities of the future. New to this edition are: further readings based on the latest research; updated data and statistics; an expanded glossary; new key concepts; additional study questions; and a listing of useful websites. The book provides a comprehensive interpretation of the urban geography of the contemporary world. Written in a clear and readable style, lavishly illustrated with more than eighty photographs, 180 figures, 100 tables and over 200 boxed studies and with a plethora of study aids Urban Geography: A Global Perspective represents the ultimate resource for students of urban geography.

The Plus Two Stage Of Secondary Education Is Considered To Be The Turning Point For Career Development. The Topics Of Study Need To Be Analysed With A New Perspective To Cope With The Changing Nature Of The Subject Matter. The Present Volume On Economic And Regional Geography Provides A Modern View Of The Present Day Location And Distribution Of Economic Phenomena And The Regional Characteristics Of Some Important Parts Of The World In General And India In Particular. The Book Is Written In Accordance With The New Syllabi Of The Secondary Education Adopted By The Higher Secondary Councils/Boards Of North Eastern States Of India From 1989-90 Session.In This Edition, The Text Has Been Suitably Revised And Updated. New Information Has Been Included In Various Chapters To Make The Book More Useful.

The leading text in the field, this book provides a comprehensive introduction to geographic approaches to studying disease and promoting health. It presents cutting-edge techniques of spatial and social analysis and explores their relevance for understanding cultural and political ecology, disease systems, and public health issues across the globe. Essential topics include how new diseases emerge and epidemics develop in particular places; the intersecting influences on health of biological processes, culture, environment, and behavior; and the changing landscape of health care planning and service delivery. The text is richly illustrated with tables, figures, and maps, including 16 color plates. New to This Edition: thoroughly updated in response to the challenges of globalization, development, and demographic changes incorporates the latest data and conceptual frameworks chapters on neighborhood analysis and the use of GIS in modeling health and disease GIS applications and examples are integrated throughout. This book will be important reading for students and instructors in geography, public health, epidemiology, international health policy and planning, medical sociology, and related fields. It will also serve as a primary text in advanced undergraduate- and graduate-level courses such as Medical Geography and Health Geography.

"This book clearly outlines key concepts that all geographers should readily be able to explain. It does so in a highly accessible way. It is likely to be a text that my students will return to throughout their degree." - Dr Karen Parkhill, Bangor University "The editors have done a fantastic job. This second edition is really accessible to the student and provides the key literature in the key geographical terms of scale, space, time, place and landscape." - Dr Elias Symeonakis, Manchester Metropolitan University "An excellent introductory text for accessible overviews of key concepts across human and physical geography." - Professor Patrick Devine-Wright, Exeter University Including ten new chapters on nature, globalization, development and risk, and a new section on practicing geography, this is a completely revised and updated edition of the best-selling, standard student resource. Key Concepts in Geography explains the key terms - space, time, place, scale, landscape - that define the language of geography. It is unique in the reference literature as it provides in one volume concepts from both human geography and physical geography. Four introductory chapters on different intellectual traditions in geography situate and introduce the entries on the key concepts. Each entry then comprises a short definition, a summary of the principal arguments, a substantive 5,000-word discussion, the use of real-life examples, and annotated notes for further reading. Written in an accessible way by established figures in the discipline, the definitions provide thorough explanations of all the core concepts that undergraduates of geography must understand to complete their degree. 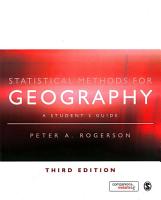 'This book provides students with everything they need to know in both a basic statistics course and also in introductory courses focused on spatial data analysis. It is extremely well-written, well-organised and has plenty of easily understood examples - really the ideal textbook. I recommend it extremely highly' - Stewart Fotheringham, Director, National Centre for Geocomputation National University of Ireland Maynooth The Third Edition of this bestselling student favourite has again been revised and updated to provide an expert introduction to the principal methods and techniques needed to understand a statistics module. Features new to this edition include: - further introductory material - updated exercises and illustrative examples - updated downloadable datasets

In this classic text and professional resource, leading geographers and urban planners present the foundational concepts and methodological tools that readers need to understand and engage with today's pressing policy issues. Covered are such key topics as passenger and freight dynamics in the American metropolis; the urban transportation planning process, including the use of GIS; and questions related to public transit, land use, energy, equity, environmental impacts, and more. The book features more than 100 maps, charts, and photographs.