Frontiers in Antimicrobial Resistance: a Tribute to Stuart B. Levy offers a unique examination of the state of antimicrobial and anticancer drug resistance. Written by acknowledged experts who have spent time in Dr. Levy’s laboratory or who have otherwise collaborated with him professionally, this new volume is a tribute to Dr. Levy and acknowledges his significant contributions to the field. Offers a unique scope of coverage, integrating the latest science with public education programs to use antimicrobials appropriately Provides comprehensive and detailed coverage of the most current research on antimicrobial resistance Presents contributions from acknowledged experts in the field Covers the most important clinical pathogens and the major drug classes Addresses an urgent medical crisis Recognizes Dr. Stuart B. Levy and his vital contributions to the field 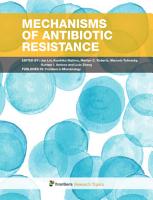 Antibiotics represent one of the most successful forms of therapy in medicine. But the efficiency of antibiotics is compromised by the growing number of antibiotic-resistant pathogens. Antibiotic resistance, which is implicated in elevated morbidity and mortality rates as well as in the increased treatment costs, is considered to be one of the major global public health threats (www.who.int/drugresistance/en/) and the magnitude of the problem recently prompted a number of international and national bodies to take actions to protect the public (http://ec.europa.eu/dgs/health_consumer/docs/road-map-amr_en.pdf: http://www.who.int/drugresistance/amr_global_action_plan/en/; http://www.whitehouse.gov/sites/default/files/docs/carb_national_strategy.pdf). Understanding the mechanisms by which bacteria successfully defend themselves against the antibiotic assault represent the main theme of this eBook published as a Research Topic in Frontiers in Microbiology, section of Antimicrobials, Resistance, and Chemotherapy. The articles in the eBook update the reader on various aspects and mechanisms of antibiotic resistance. A better understanding of these mechanisms should facilitate the development of means to potentiate the efficacy and increase the lifespan of antibiotics while minimizing the emergence of antibiotic resistance among pathogens. 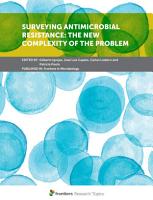 In January of 2015, under the 1st International Caparica Conference in Antibiotic Resistance, a Research Topic entitled: “Surveying Antimicrobial Resistance: Approaches, Issues, and Challenges to overcome”, was published (http://journal.frontiersin.org/researchtopic/3763/surveying-antimicrobial-resistanceapproaches- issues-and-challenges-to-overcome). The problem of antimicrobial resistance (AMR), caused by excessive and inappropriate use of antibiotics, is a public health issue that concerns us all. The introduction of penicillin in the 1940s, the start of the antibiotics era, has been recognized as one of the greatest advances in therapeutic medicine. However, according to the World Health Organization (WHO), AMR infections are now an increasing worldwide public health threat and a post-antibiotic era is imminent, where common infections and minor injuries could be fatal. AMR is a typical ‘One Health’ problem, in which livestock animals and the environment constitute AMR reservoirs and transmission routes to and from the human population. Without effective antimicrobials to counter and prevent infections, other major achievements in modern medicine, such as organ transplantation, cancer chemotherapy and major surgery, risk being compromised. AMR infections in animals have negative outcomes on animal health, welfare, biosecurity and production. In 2006, the ban of growth promoting antibiotics highlighted antibiotic use in animal production as a risk factor in the development of antibiotic resistant bacteria. Bacteria can be transferred to humans via several routes; consumption of animal products, exposure through contact with animals, and the contamination of ground and surface waters by animal waste products. Therefore, it is of utmost importance that antimicrobial use in animals is reduced to a minimum, without compromising animal health and welfare. Mechanisms of bacterial antibiotic resistance are classified according to the types of antibiotic molecules or their targets in the cell. Environmental antibiotic-resistance genes are spread then acquired by clinically relevant microorganisms. Many resistance genes are conveyed into pathogen genomes via mobile genetic elements such as plasmids, transposons or integrons, increasing the propagation of potential resistant pathogens. Substantial progress has already been made in elucidating the basic regulatory networks that endow bacteria with their extraordinary capacity to adapt to a diversity of lifestyles and external stress factors. So how will we face bacteria in the future? 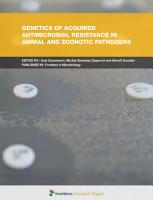 Development and spread of antimicrobial resistance is the result of an evolutionary process by which microorganisms adapt to antibiotics through several mechanisms including alteration of drug target by mutation and horizontal transfer of resistance genes. The concomitant occurrence of independent antimicrobial resistance mechanisms is a serious threat to human health and has appeared in several emerging epidemic clones over the past decade in humans and also in animals. The increasing prevalence of antimicrobial drug resistance among animal and zoonotic foodborne pathogens is of particular concern for public health. In this Ebook, we gathered a collection of articles which deal with the most important aspects of the genetics of acquired antimicrobial resistance extending from medically-important resistance, emerging epidemic resistant clones, main mobile genetic elements spreading resistance, resistomes, dissemination between animals and humans, to the “One Health” concept. 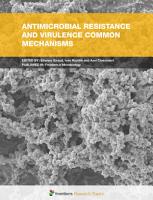 Multiple relationships exist between antimicrobial resistance and bacterial virulence, and the spread of clones combining multiple antibiotic resistance and a high virulence level is an increasing problem. It was previously described how mutation-driven or horizontally acquired resistance mechanisms can also have effects on virulence. It was also reported that mobile genetic elements often carry both resistance determinants and virulence-modulating genes, which favors the co-selection of both traits. In the present volume, we present a collection of articles which document additional aspects of the interactions between antimicrobial resistance and virulence in bacteria, and describe their potential therapeutic consequences. 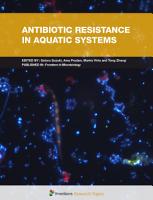 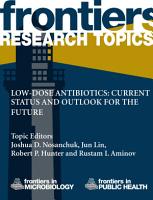 Antimicrobial therapy is a key factor in our success against pathogens poised to ravage at risk or infected individuals. However, we are currently at a watershed point as we face a growing crisis of antibiotic resistance among diverse pathogens. One area of intense interest is the impact of the application of antibiotics for uses other than the treatment of patients and the association with such utilization with emerging drug resistance. This Research Topic “Low- dose antibiotics: current status and outlook for the future” in Frontiers in Microbiology: Antimicrobials, Resistance and Chemotherapy details various aspects of the wide ranging effects of antimicrobial therapy from areas such as the regulation of host responses to modulation of bacterial virulence factors to acquisition of antibiotic resistance genes.