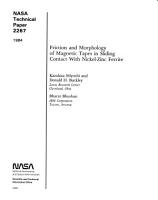 Friction and morphological studies were conducted with magnetic tapes contacting a Ni-Zn ferrite hemispherical pin in laboratory air at a relative humidity of 40 percent and at 23 C. The results indicate that the binder plays a significant role in the friction properties, morphology, and microstructure of the tape. Comparisons were made with four binders: nitrocellulose; poly(vinyledene) chloride; cellulose acetate; and hydroxyl-terminated, low-molecular-weight polyester added to the base polymer, polyester polyurethane. The coefficient of friction was lowest for the tape with the nitrocellulose binder and increased in the order hydroxyl-terminated, low-molecular-weight polyester resin; poly (vinyledene) chloride; and cellulose acetate. The degree of enclosure of the oxide particles by the binder was highest for hydroxyl-terminated, low-molecular-weight polyester and decreased in the order cellulose acetate, poly (vinyledene) chloride, and nitrocellulose. The nature of deformation of the tape was a factor in controlling friction. The coefficient of friction under elastic contact conditions was considerably lower than under conditions that produced plastic contacts. 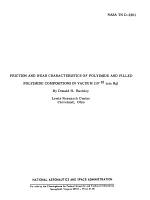 A wheel turns because of its encounter with the surface of the road; spinning in the air it goes nowhere. Rubbing two sticks together produces heat and light; one stick alone is just a stick. In both cases, it is friction that produces movement, action, effect. Challenging the widespread view that globalization invariably signifies a "clash" of cultures, anthropologist Anna Tsing here develops friction in its place as a metaphor for the diverse and conflicting social interactions that make up our contemporary world. She focuses on one particular "zone of awkward engagement"--the rainforests of Indonesia--where in the 1980s and the 1990s capitalist interests increasingly reshaped the landscape not so much through corporate design as through awkward chains of legal and illegal entrepreneurs that wrested the land from previous claimants, creating resources for distant markets. In response, environmental movements arose to defend the rainforests and the communities of people who live in them. Not confined to a village, a province, or a nation, the social drama of the Indonesian rainforest includes local and national environmentalists, international science, North American investors, advocates for Brazilian rubber tappers, UN funding agencies, mountaineers, village elders, and urban students, among others--all combining in unpredictable, messy misunderstandings, but misunderstandings that sometimes work out. Providing a portfolio of methods to study global interconnections, Tsing shows how curious and creative cultural differences are in the grip of worldly encounter, and how much is overlooked in contemporary theories of the global.

It is one oft he major challenges for materials scientists and mechanical engineers to cope with the demands for long lasting and reliable systems in all markets and for all applications. The loss of energy by friction and the limits of endurance by wear can be countered by well selected materials and surfaces. The economical and ecological significance of wear and friction is undisputed and can equate to between 1 and 4% of the gross national products of industrial countries. Although the basic understanding of the mechanisms of friction and wear has drastically increased during the last five decades, many technical solutions are still carried out "following trial and error." Selection of the best material and the optimal topography in combination with the desired physical and chemical properties requires a systematic approach and a deep understanding of the acting mechanisms. Thus friction, wear, and wear protection are interdisciplinary fields which bring together scientists from the engineering, natural, biological and medical sciences. This book is an indispensable source for everybody who needs to solve the problems of friction and wear on materials.

This classic work, originally published in 1950, was a landmark in the development of the subject of tribology. When it was first published, one reviewer wrote that it 'marks the beginning of a new epoch in the study of friction and lubrication .... The most interesting and comprehensive work on a single branch of physics I have ever read.' For the 1986 reprint David Tabor wrote a new preface, reviewing developments in the subject in the 36 years since the book first appeared. He has also added an appreciation of the life and work of F.P. Bowden, who died in 1968.